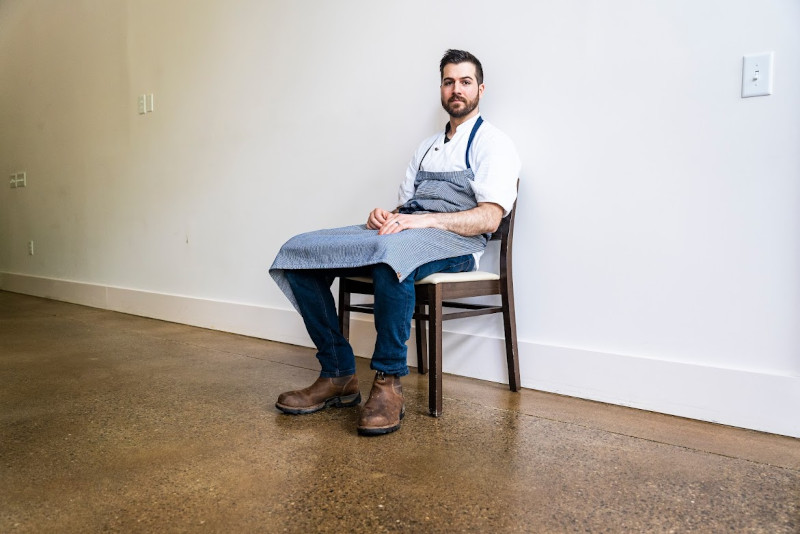 Trenton Shank was born and raised in the wild western suburbs of Dallas/Ft. Worth. Early on he discovered cooking was something he loved to do and he had a knack for it. He won a national culinary competition while still in high school that led to scholarships to the New England Culinary Institute. He graduated first in his class and went to work gathering professional experience.

After NECI, Trent worked at the beloved Relais & Chateaux property, Twin Farms, in Barnard, Vermont. After 2 years he moved to the West Coast, working as a chef and then as a farmer at the Fess Parker Winery. He developed their garden, growing everything possible for the restaurant; including pigs. One special pig named Bruce was grown and loved and served to the guests at Trent’s wedding in September of 2020 to pastry chef; Emma Spalding Shank. Two weeks later, the couple moved across the country to Durham and opened Plum.

Trent is inspired by the farmers and producers around Durham to create Plum’s seasonal menus. His southern cuisine is inflected with Mexican, Cajun and Asian flavors that he loves. Emma and Trent reside in Durham and plan to grow many things together. We are lucky to have them as chef and pastry chef at Plum. 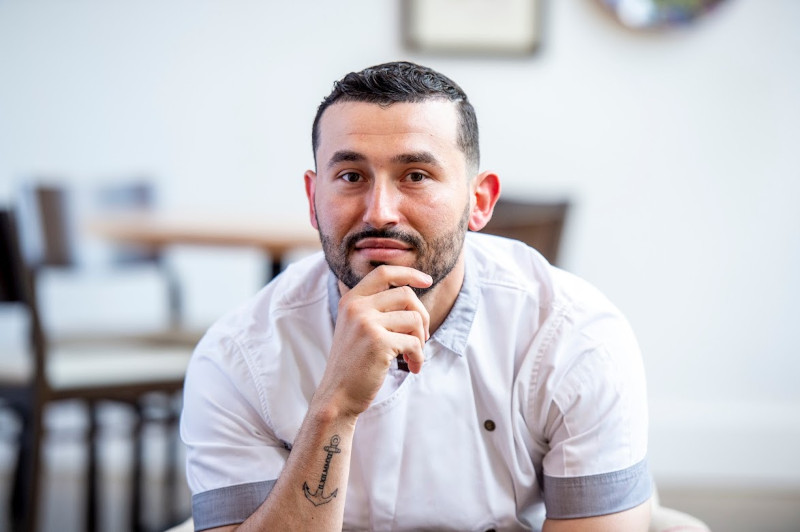 Nick Grady was born in the Ukraine and raised in Florida where his family spent every weekend around the water, swimming, fishing and boating in the Intracoastal Waterway. In high school Nick considered police training; we think he would have made a great spy, but then he found cooking. He attended the New England Culinary Institute, graduating in 2015. From Vermont, he moved to New York City and worked at the legendary, and Michelin starred Gramercy Tavern. Next, Nick headed west and worked in Ojai; then moved to Santa Barbara to open the Hotel Californian. While there and under his leadership their signature restaurant; Blackbird, earned a Michelin recommendation.

At Plum, Nick collaborates with Trenton on the seasonal menu. He has a great design sense and can make any dish beautiful. Nick also trains new staff and cleans like a mad man, making us all better and happier in the kitchen. 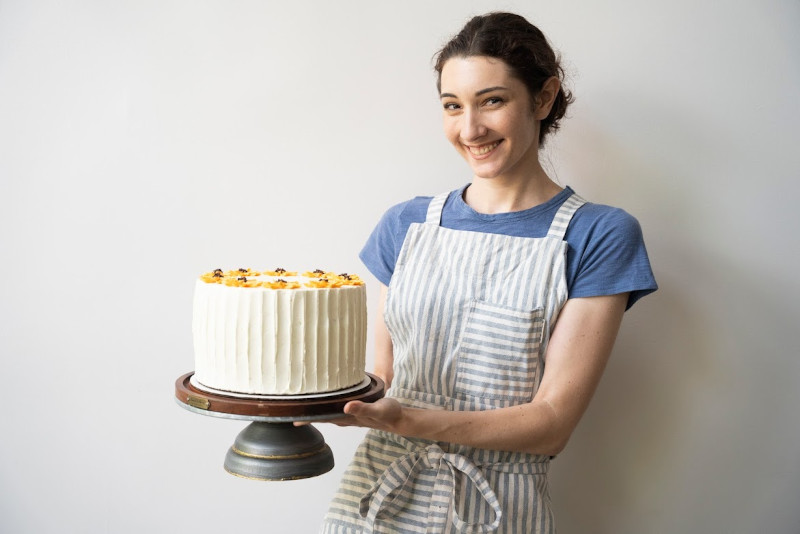 Emma started cooking when she enrolled in Prostart; a rigorous national culinary education program in high schools throughout the country. She won first place in the Maryland Prostart Invitational as a junior, then placed third in the Nationals that year where she met another culinary competitor; Trenton Shank. Throughout her education, Emma was recognized for her academic ability and culinary talent; receiving a scholarship to New England Culinary Institute where Trent was already enrolled. They have been together ever since.

Trent and Emma worked together at the Fess Parker Winery & Vineyard, in Los Olivos, California where they were married in September of 2020. Two weeks later they were on the road to Durham, where Trent was opening Plum. Emma joined the team in September of 2021. When they are not working, you will find this culinary duo at home; cooking, planting and growing everything their dogs and chickens will allow. 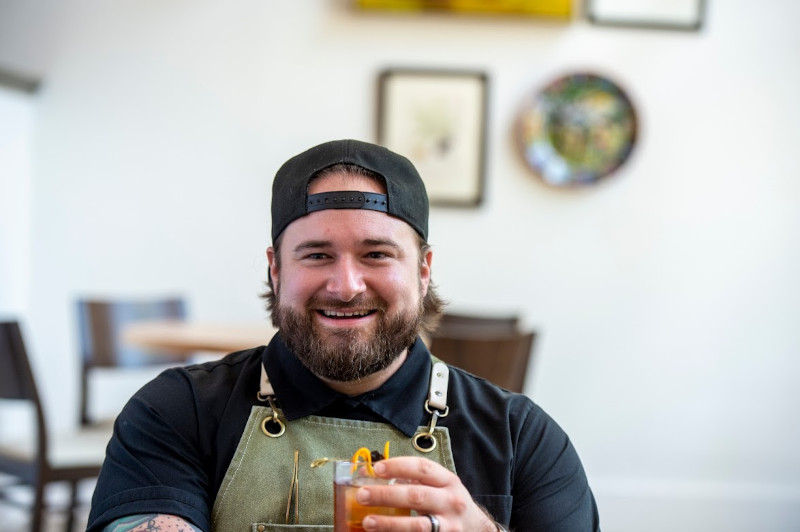 Curtis (Land Pirate) grew up in Wilmington and moved to Durham with his wife, Sara and their pup, Harlowe, last summer. Like many cooks, Curtis transferred real athletic skill to the confines of the kitchen. He played soccer from the age of 3 and traveled extensively around the East Coast with the 89 Breakers. He also loves to surf and spent long days on the water at Wrightsville Beach before moving west.

When he is not doing it professionally, Curtis enjoys cooking with and for friends and family. We are pleased to call him a member of our family at Plum. 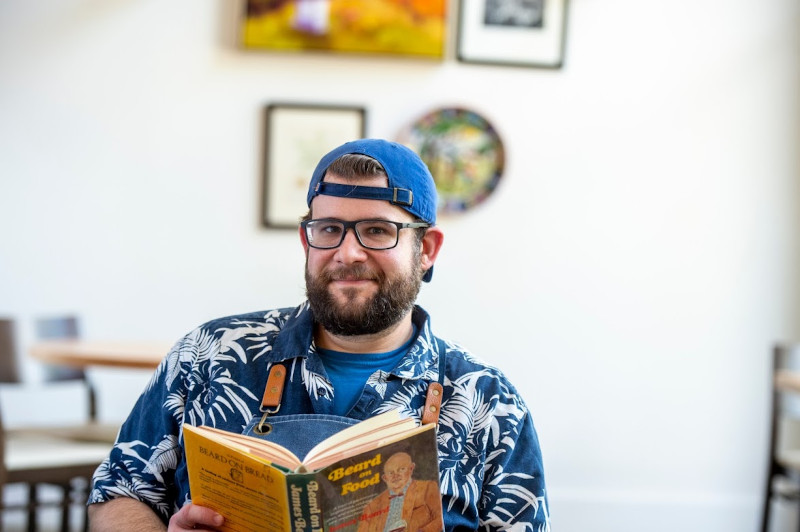 Will (Cap’n Brunch) grew up studying the flora and the fauna and the food of his hometown, Charleston, SC. He graduated from the Culinary Institute of Charleston in 2014 and worked in various Mediterranean restaurants, then moved to Durham in 2015.

Will has fallen in love with the Bull City, where he is cooking the regional cuisine he loves most at Plum. When Will is not in the kitchen, he enjoys going to Bulls and Canes games, hiking along the Eno and camping around North Carolina. 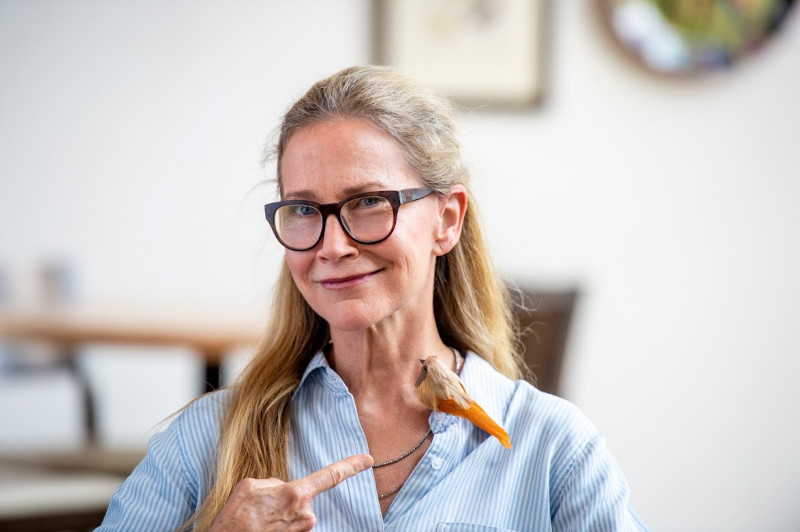 Lisa was born in North Carolina and educated in New York City, where she soaked in the deliciousness and diversity of city life. She was the Director of Culinary Relations for All-Clad for over 2 decades, and helped grow the company from a regional brand to a global culinary standard bearer. Along the way, Lisa worked with and learned from outstanding chefs, restaurateurs, food editors, writers and colleagues and it changed her life. Having her own restaurant became the dream which has come to life at Plum.

How Lisa sums it up: “Plum is a mash-up of my dreams and desires from a life of eating in restaurants. I am humbled by my luck to land in Durham, because it’s not just a great town; it’s a great restaurant town. Then to find great friends, a great chef and a stellar team that came together during a pandemic. We want to create something unique and wonderful for our community.” 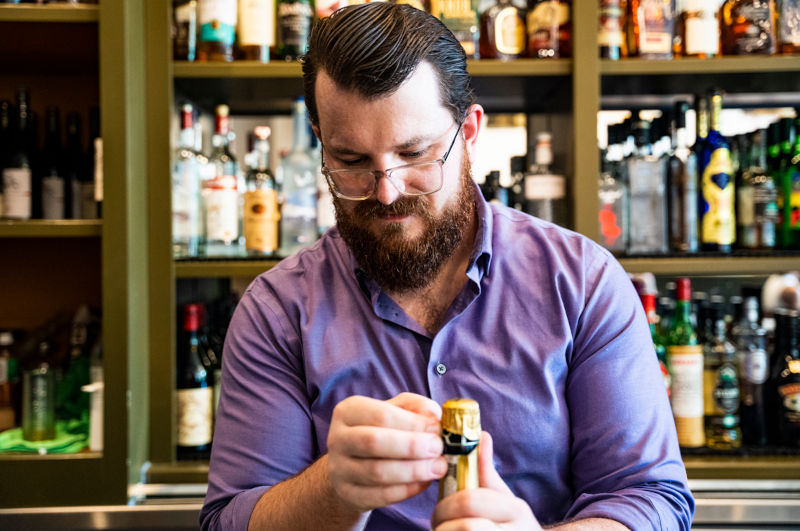